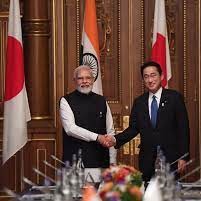 India, Japan to work together to help Sri Lanka during crisis 27.May.2022

India and Japan have agreed to work together on assisting crisis-hit Sri Lanka, the Japanese government said, following a recent meeting between Prime Ministers Narendra Modi and Fumio Kishida in Tokyo.

Mr. Modi and Mr. Kishida met on May 24 on the sidelines of the Quad summit and held bilateral talks on “close cooperation” to promote efforts to realise a ‘Free and Open Indo-Pacific’, in addition to collaboration in spheres including defence, clean energy, and investment.

Following the meeting, Japan’s Ministry of Foreign Affairs said the leaders “discussed the situation in Sri Lanka and confirmed that they will cooperate with each other in light of the current economic crisis and deterioration of the humanitarian situation in the country.” Further, they “shared the view to work together to develop Indo-Pacific Economic Framework into an inclusive framework that will bring substantive benefits to the region,” according to a statement.

Ministry of External Affairs made no specific mention of Sri Lanka. “The two leaders exchanged views on recent global and regional developments. They noted the convergences in their respective approaches to the Indo-Pacific and reaffirmed their commitment towards a free, open, and inclusive Indo-Pacific region,” read its May 24 statement.

For over half a century, Japan has been one of Sri Lanka’s top donors and development partners, although its grants and investments have received much less attention compared to those from China or India.

Japan’s announcement of collaborating with India to help Sri Lanka, assumes significance, coming shortly after Sri Lankan Prime Minister Ranil Wickremesinghe’s proposal that Quad members— United States, India, Japan, and Australia — take the lead in setting up a foreign aid consortium to assist Sri Lanka, that is reeling under the worst economic crisis since Independence.  India has extended about $ 3.5 billion assistance since January this year, by way of loan deferments and credit lines for essential imports.

Japan’s initiative also comes despite Colombo scrapping two major infrastructure projects with Japanese involvement. In September 2020, Sri Lankan President Gotabaya Rajapaksa ordered the termination of a $ 1.5-billion Japanese-funded light rail project, on that basis that it was not a “cost-effective solution”. In early 2021, Sri Lanka ejected Japan and India out of a trilateral project to jointly develop a container terminal at the strategically located Colombo Port, causing considerable diplomatic tensions. India’s Adani Group was subsequently roped in to develop another terminal at the same port.

Meanwhile, addressing the ‘International conference on the future of Asia’ organised by Nikkei virtually, Mr. Gotabaya said Sri Lanka “urgently requires” assistance of friends in the international community “to ensure that our immediate needs in terms of the importation of essential medicines, food supplies, and fuel are met.”

Japan “remains one of Sri Lanka’s key development partners”, the Sri Lankan President said, expressing hope that ongoing negotiations on “bridging funds” from Japan would soon conclude. “We are also in urgent need of bridging financing to restore confidence in our external sector and stabilise our economy until the debt restructuring process is completed and an IMF programme commences,” he said, while thanking India, Sri Lanka’s “close friend and neighbour”.

Colombo earlier sought India’s help in securing bridge financing to cope with the downturn, until an International Monetary Fund package materialises. The government is in talks with IMF on debt restructuring after opting for a preemptive default on its foreign debt of about $ 50 billion.