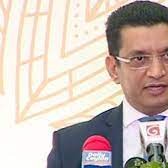 A President who takes charge of the country amid challenges 13.AUG.2022

It is our responsibility to give him time

External Affairs Minister Ali Sabri said in Parliament yesterday that proper planning by everyone is necessary to solve the country's crisis. Minister Ali Sabri said that President Ranil Wickremesinghe has taken responsibility for massive challenges during the critical period and said that the President should be given time to overcome the challenges.

The Minister of External Affairs said this while addressing the debate on the 03rd day of the adjournment of the House on the President's Policy Briefing Speech held in the Parliament yesterday.

The Minister continued to address the House:

Proper process and planning is necessary to address the country's crisis situation.

Even though the 19th Political Amendment got three-two majority support, it was a double-edged sword, so it was not possible to continue the government.

Although it is easy to win elections, planned programs are necessary for the proper functioning of the country.

The new president has an opportunity to lead the government for the next two and a half years.

The number of government employees seen at 06 lakhs has increased to 15 lakhs. 199 government institutions are facing a huge movement.

In that way, a comparison should be made between Telecom Company and Air Lanka Company. We have to see how much profit can be made to the government through these companies.

Actions should be taken to build up the economy of the country through an all-inclusive systematic work program.

President Ranil Wickremesinghe has taken on a massive challenge at a very critical time. It needs to be given time. Even when there are revolutions and protests, all actions should be carried out in accordance with democracy and the constitution. No action can be taken in violation of the Constitution.

90% of the people in the country have taken to the streets as the cost of living has increased as the economy has been severely affected.

This is a normal thing to happen. However, taking it as an opportunity, some parties who do not respect democracy acted very badly. They manipulated people's sentiments to suit their agenda. It is strange to say that only a few people who revolutionized the country for 70 years and were involved in various bad deeds should take responsibility for it. The minister further said that such claims are unacceptable.